How To Find The Best Online Blackjack Games?

Whether online or live in a casino, Blackjack stays one of the favorite casino games; moreover, it can be called a classic. Even before the digital age, players and gamblers would rush to the casino and sit at a blackjack table. Nowadays, blackjack online has also gained a fan-base counting millions of players, and online blackjack casinos have very loyal customers who keep coming back for more of the gambling thrill.

There are many theories wherefrom Blackjack originates. Some say from France, others from Spain, while the third group says it can be traced back to the ancient Roman times. The 1700s in France saw the rise of many casino games like the roulette, and presumably, blackjack. It is true that the French had a card game called Vingt-et-Un which corresponds to number 21. The Spanish played a game called One and Thirty, where the goal was reaching a total count of thirty with three cards. Advocates of the Romans say that the Romans played a similar game just with wooden blocks with different numbers on it. It remains uncertain which theory is exactly true, but one is for sure – blackjack reached America through French colonists.

The game became very popular and was first known simply as “21”. The name blackjack became common after Nevada’s first casino (opened in the 1930s) offered a special jackpot for getting a black jack (spades or clubs) combined with an ace of spades on your first two cards (1o to 1 payment). The special bet didn’t last for long, but the name of the game stayed, and that is how blackjack became blackjack, even if some call it still 21 or blackjack 21. 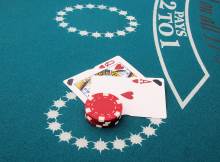 The dealer starts with a 52-card deck minus the jokers. In casinos, the dealers often use multiple card decks, usually between six and eight, which makes counting more difficult. Counting is a technique players use to turn the tables on the house and gain a slight mathematical advantage in the game. Multiple decks can vary from two to eight, depending on a particular variation, and collectively they are called a shoe. Blackjack is a game always played against the dealer. Casino tables take up to eight people for a round of Blackjack, and all of them play against the dealer. The information on betting limits can usually be found at every table where the rules are clearly written for all players to see. For example, “Blackjack pays 3 to 2” as well as “Dealer must draw on 16 and stand on all 17” can usually be found written at a Blackjack table.

The bets at a Blackjack table are placed in a box. The game always involves a minimum and maximum bet. The players can choose how much they are going to bet as long as in the range between the minimum and the maximum limit. The maximum amount is usually ten or twenty times of the minimum amount. The playing rounds can result in a loss, win, or a push. The “push” is another name for draw used in blackjack and it occurs when both a player and the dealer have the same final count. When it occurs, the original bet is returned to the player as it was placed at the start of the round. The values of the cards from 2 to 10 corresponds to the number on them, while J, Q, and K have the value of 10 points. The ace can have the value of either 1 or 11 points, and the value will always be the one which is more favorable for the player.

The dealer distributes two cards face-up to each player, whereas the dealer’s cards are dealt so that one is face-up and the other facedown. The round starts with the player left from the dealer and goes clockwise. The player can choose to draw no more cards (“stay”) draw more cards from the deck one by one. It continues until the player decides to go up against the dealer, or when the total count of 21 or higher is reached. Many online Blackjack casinos have restrictions on how many cards can be drawn while others do not. The same goes for live casinos.

When all players have made their decisions, either staying in the game or busting (their total count exceeding 21), the dealer reveals his hidden card. If the dealer happens to have a blackjack, all players without the blackjack will lose automatically. If the dealer does not have a blackjack, he/she can either take more cards from the deck or stand with the cards he/she has depending on the value of his/her cards. Still, the dealer does not have the freedom like players and has to play by the rules which dictate that he has to take more cards if the if the hand is lower than 17 and must stand when the count equals or is higher than 17.

Blackjack or the Natural 21

If the player has a ten-point card in combination with the ace card, it is called a Blackjack because together they make 21, and the player automatically wins, unless the dealer has the same cards. Blackjack usually pays additional bonus of 3 to 2, although when playing online blackjack, you will probably encounter casinos with different house rules.

To spice up the bets and keep the game more interesting, certain side rules were introduced for additional bets. For example, when the dealer’s face-up card is an ace, then the players can bet whether the dealer is going to have a Blackjack. These additional bets can only be made before the round starts. This bet is known as insurance bet and it actually works against the player. Playing online blackjack, you should stay away from the insurance in most cases, as it will lose you money in the long run.