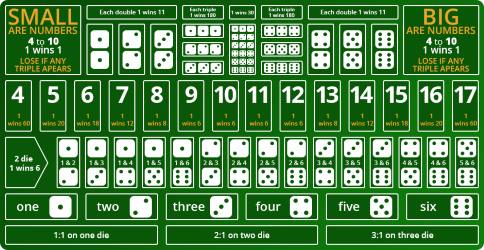 Sic Bo is an ancient Chinese dice game that had been around for many centuries before coming to the attention of Western casino players. The game was introduced to America by Chinese immigrants at the turn of the century and slowly caught on in Western culture. By the 1990s major casinos in North America had started offering the game in land-based venues to capture the interest of Asian tourists, though it was promoted more as a novelty rather than a serious table game alongside the likes of Roulette and Blackjack.

It wasn’t until the online gambling industry took off that the casino game of Sic Bo began to gain widespread appeal. Most popular online casinos today, unlike their land-based counterparts, offer a version of Sic Bo. The game is still widely played in China and is very popular in many Asian countries, particularly in places like Macau, where it continues to be one of the most played titles.

How Is a Round of Sic Bo Played?

Casino Sic Bo is played using three dice and a table displaying as many as fifty betting options. To win, a player places a wager on the betting table and attempts to guess the outcome of a dice throw. In a land-based casino, a mechanical device is used to shake the three dice, feeding results into a computer which lights up areas on the table to show winning bets.

With the online version, random number generators are used to represent a dice throw and display the results electronically. Different betting options in Sic Bo offer a wide selection of odds, with bets on an outcome ranging from 1:1 to 180:1.

Sic Bo online is very intuitive, and easy to learn. Players would usually start a game by adjusting the betting chip value. A player then clicks on the bets they wish to make. After the stakes have been placed, click on the “ROLL” button and the dice will spin until the results are shown. If the player has guessed correctly, the software will calculate the winnings and add them to the player’s balance. The table below provides some typical examples of wagers which could be placed on a Sic Bo table. Bear in mind, that there are many other options available.

There are no hardfast strategies that can influence the outcome of a dice roll. A gambler’s best option for a successful result in this game is to know and understand the various types of bets available, and employ a strategy that better meets the player’s personal objective. For example, someone who wants to enjoy a good fun game at the casino, break even or perhaps come out ahead, a low-risk strategy is most recommended to get the most value from their bankroll.

Employing a low-risk strategy involves placing bets which offer 1 to 1 odds, which essentially means doubling up on each win. High/Low and single number bets are the most common bets made in Sic Bo, as they offer the lowest house edge. It is safe to say that when placing these type of bets a player will win on average 50% of the time. This is the best option for players who want to enjoy a good game while providing the possibility of ending the session with a few losses or even some profit.

This kind of strategy could involve placing a value bet on a wager with high odds, such as a “specific triple” or a “three dice total number” bet where the number is very high or low to get the odds. The downside of this strategy is that players should expect to succeed much less frequently, but will win big when the numbers do come in.

There is also the option of playing on both sides of the fence by placing low and high-risk bets simultaneously. This is possibly not the best strategy to employ since a player’s bankroll will go down a lot quicker, and there is no guarantee of a big win. Overall, it is a very entertaining way to play the game and does allow for a slight chance of a successful outcome.

Sic Bo is a fast-moving, fluid game of dice. It is simple to learn and easy to play – comparable in many ways to Roulette, players only need to decide on which options they would like to place their bets. Sic Bo is purely a game of chance and luck; no real-working strategy can be employed to improve a player’s prospects for winning, other than to play the house odds. The best way to play, is for a gambler to develop their personal betting strategies, often through trial and error – this is why it is highly recommended for potential game enthusiasts to try free Sic Bo online, before putting real money in. Overall, this game is perfect for people who like to take a risk and enjoy the random uncertainty of the dice being thrown.