Bingo was created hundreds of years ago in Europe and was regarded as one of the first lottery games ever. In the late 1920’s, it was introduced in North America, and so its world-wide popularity began to rise. Many years later, the fame of Bingo experienced a “second wind“, with its incorporation in the rosters of online casinos everywhere. By using RNG algorithms to replace numbered balls, software versions of the game and its many variations gradually became widespread in the online gambling industry. 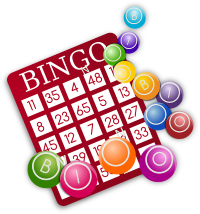 The development of faster broadband speeds allowed for the creation of live Bingo broadcasts via video streaming technology. Bigger communities of players started to form, using local and wide area networks to turn Bingo into one of the most recognized progressive jackpot titles of all times. Micro-awards became Mega Jackpot prize money, attracting even greater interest and game participation by the public. In this review, you will find a lot of useful information on rules, strategies, and of course, tips that might help you with your gaming session!

Main Objective of the Game

There are multiple variations of this lottery title, so you can expect that rules may differ slightly depending on a specific variant. But with all games of Bingo, there is a fundamental set of rules which defines this lottery title. To win money in the land-based version, a player must complete specific objectives such as “complete a line” or “first two lines” of the Bingo card and be the first to do so. Usually, the big prize is to complete all the numbers on the card before all other competing players. In the new software version of the game, players win when they complete predetermined card sequences within a specified amount of numbers. For example, the top prize may be given to players who complete their card within 60 balls, but lesser cash prizes are also available for cards that are complete within 70 balls.

Rules – How to Play Online Bingo

The rules for Bingo a very basic, to say the least. The game commences when a player purchases one or multiple cards, with numbers randomly populated inside a pattern of squares. Balls are then drawn and announced by the operator, and if a player has any of those numbers on their cards, they mark them. Bingo would usually require for an objective to be completed, such as the first person to complete a line – the big prize is always reserved for the player who gets all the numbers on the game card before any other participant.

In the online version of the game, a table is displaying how much is to be paid out for the completion of these objectives, before the ball allowance is used up. Certain features were introduced in the online version, allowing for some automated functions such as auto marking the card. Overall, the only real decisions that a player has to make when playing Bingo online, is which variation of the game to play on and how many cards to purchase in every round.

This is What a Common Bingo Card Looks Like

In the world of online Bingo, the range for game variations is very wide. What this means is the presence of unique features, applied to the fundamental principles of the lottery itself. Almost every round is different from one another, in terms of the amount of balls played, the tempo of the game, betting limits, number of playable cards available, different themes and styles etc., the list is endless.

One interesting evolution is the introduction of the “Progressive Bingo” game. Similar to progressive jackpot slots, this type of lottery retains a percentage of each players ticket cost, to add to a community pool which is set aside for the jackpot prize money. Naturally, with increased prize money comes greater player participation, which in turn further raises the already accumulated amount of the reward pot that can reach hundreds of thousands, sometimes millions of dollars. This more than anything explains the exponential growth of Bingo as one of the most popular casino games.

Tips for An Excellent Bingo Session

Bingo is a “numbers game of chance”, and there are not too many things a player can do to increase the likelihood of winning. Decision-making in Bingo comes down to where to play, variation type, and what cards a player should choose to use. Once those conditions are met and the balls start rolling, there is nothing more a player can do to influence a winning result. There are, however, a few things which people should consider doing in order to make the game experience more enjoyable and increase the frequency of winning when applied over time. Below, we have presented the best tips to influence long-term success in Bingo, check them out.

No Better Time to Play a Sociable Game of Bingo

The introduction of Bingo online has created a larger community of players, due to its modified gameplay and prize variations. The game itself is no longer confined to land-based venues and specific time frames. Online Bingo allows people to play from any device be it PC, smartphone, or tablet from any location at any time. These developments have been instrumental in creating a new generation of lottery players. With the industry doubling in size every year, there has been no better time to ride the wave of change and get connected with this very social game of chance and luck.